The land of the Fay and Zarth, where illusion, enchantment, clockwork machines, and outlandish creatures are common.

The Fay call the world "Faierie" pronounced "fay-ee-ree". Faierie commonly refers to the upper half of TwinWorld. 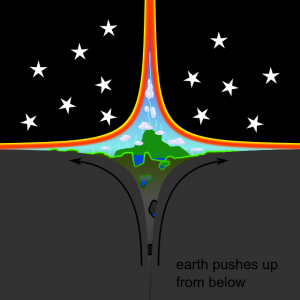 The adamant is pushed up from below. Air also originates from the lower glyph, howling through the depths before finding the surface through huge breathing vents. The Adamant in the depths spauls off extraordinary metals and rocks, (and other hard rocks, ores, gems, etc). Stone rot and other life-forms of TwinWorld break down the super-rocks into granite, and eventually the rock into soil as it is pushed furthur up. The outer fire flows downward from the sky, spreading out and meeting the adamant at the horizon. With it, the Solid Clouds descend to blanket the skies. The fay live between these two funnel-shaped surfaces (the adamant below and the outer fire above). Near the core of the world is the Heart of Water, sometimes beating high in the sky, sometimes deep underground, sometimes the size of your thumb, sometimes twenty miles across.

The form is significantly identical to a "Biconic cusp" [1] 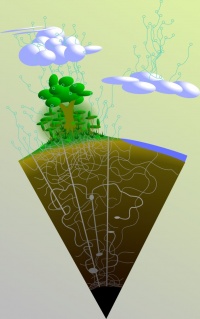 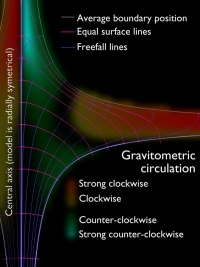 TwinWorld is layered. The lowest layer is the adamant, stone that no tool can mar. Above that is solid stone, then rock and earth, followed by the forests, Sky Vines and solid-clouds, and finally the thin free air and the outer fire.

The form of TwinWorld becomes more solid near the Adamant, and more dynamic near the Outer Fire. This includes lifeforms, matter, and gravity (see below).

Gravity is oriented away from the Outer Fire, and perpendicular to the Adamant (down along the walls toward the axis).

Due to the shape of the gravitational field, torsion (or rotation) tends to occur. This is a form of gravitational shear which causes objects to rotate. The map to the right displays the direction of gravity at various locations, as well as the torsion fields. In general, this causes atmospheric downdrafts along the central axis, and massive atmospheric upwelling along the black zone.

Near to the outer fire the magnitude and direction of gravity begins to fluctuate, and become localized. Pockets of convergence, divergence, and both large scale and small scale coruscation occur. This causes pressure differences, and tends to shuffle the Solid Clouds around.

This causes some interesting effects. Most landmasses are beneath the level where the level surfaces become concave, so the landmasses of TwinWorld will be generally convex. Land will generally fall away into the distance, and views will be dominated by the SolidClouds and the Horizon Cliffs. Meanwhile, near the Horizon, looking away from the Adamant, the rest of TwinWorld will appear as lying sideways, down below you. In front of you will be the SolidClouds and the Outer Fire, and above, and stretching to either side is the Horizon.

In general, the gradient from the Adamant to the outer fire manifests in a number of gradients in life forms:

Very few conductive metals are exuded by the Adamant. They occur commonly in concentrated lodes. Because of the detrimental effect of conductive metals (iron, silver, gold, etc) on fay organisms (Zarth as well?) these deposits tend to be desolate, the deserts of TwinWorld.

TwinWorld has many identifyable locations and regions. The exact locations of these regions, and their relation to eachother, appears to be rather fluid, especially those regions inhabited by many of the Fay. The regions are roughly listed in order of altitude.

A Zarth outpost in the Solid Clouds. It is serviced by transports from the depths, and serves as a hop off point for explorers of the outer fire fronteer.

A congregation of solid-clouds tethered to a truly colossal tree. Betwixt which a huge city thrives in vines growing up and down. 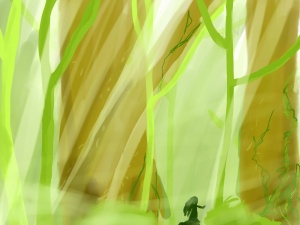 Located near the axis of TwinWorld, this is the largest congregation of sylvan Fay, the vegitation exceeding even the most prolific rainforests. Fayrie dust fills the air, and glittering motes drift from the borders into far off regions. The earth beneath breathes with tunnels and deep caverns, shot through with massive roots and colonies of fungus.

A spire of Adamant and huge metallic crystals out on the rim, Desolate Mountain houses the largest population of humans in TwinWorld. Though water is in good supply from the many storms which rage around its peak, food must be brought in from other regions.

A forest of mobile plants called Lindora. Deadly to enter, but fun to watch from a good distance away.

A location where a breathing shaft meets a main river flowing from the axis. It is a giant depression, riddled with tunnels, and caves, studded with waterfalls, overgrown with low lying vegitation, and home to thousands of species of birds who soar on the damp updrafts.

A major Zarth city, delved out of the living rock, never touched by the light of the Outer Fire. The centerpoint for the regiments, and the seat of the Zarth military might.

See the main article. The largest Zarth city, and the seat of their power.

The deepest continually inhabited Zarth city, and the spearhead of their civilization. Because of its proximity to the surrounding walls of Adamant, the lithic flow is rather pronounced, resulting in the older portions of the city deteriorating and being crushed by the ever shifting rock. The city is also continually extended downward, to keep its location as far down as possible. This leads to constant rains of debris from the old edge of Depthold falling down onto the new buildings.

Also, because of its depth, it is a hub for dragon hunting, and is constantly under attack. 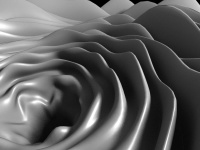 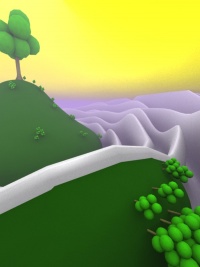 "Because scripts can do lots of things!"

I've started working on a world generator script. So far it only makes the adamant ripples, but I'm hoping to do general landscape, large tunnels, solid clouds, and perhaps some simulations. Here are some spruced up pictures (All the colored stuff was made manually, but would be fairly easy to script). Note, Trees are not to scale, unless they are pretty big. This is the whole world here, so I wouldn't want to make it too small.

Gravity maps are also included now! Yay! I am way too excited about this! It is a weighted average of the surface at the nearest point on the axis, the adamant average surface, and the outer fire average surface. I've re-done the "Gravity map" near the top of the page. The plots are all RK4 (4th order Runge-Kutta) which is very accurate.

With slight modification, the script can create lakes and oceans which conform to the gravity system. It should also be able to rotate objects to vertical (for trees, waterfalls, etc). Now that the gravity vector calculations are done, the rest should be fairly straightforward.