Some interesting ideas about Changelings

I wanted to save these notes, but they don't be long on the main page

I was thinking since faeries are traditionally weak to iron maybe we could extend it and say they're weak to conductive metallics. That would make most all technology abhorrant to them. Most of Faerie would be metallic poor except for certain dead metallic rich zones where humans and technology thrive. Something to think about.Hugh

Yeah, I like it. The iron-aversion I think wee should keep at the very least. If it has to do with all conductive materials then silver and gold would be the most potent anti-fay substances. This would also mean that Durand would live out in the countryside (without electricity), and would explain why the brothers moved into the city to get an education. That would also explain why the fayrie don't abduct people nearly as often as they used to, as metals are quite pervasive in most dwellings now, even in third world countries. Ziggy 20:49, 20 April 2008 (UTC)

Luke and I hit upon the idea of vortexes of elements. The idea would be that the long shafts to the core occur because of occasional tornado-like vortexes from the Outer Fire. Likewise, there could be huge spire-mountains formed by upward vortexes of rock. This would lend to the air of instability, as well as make the landscape more interesting. Perhaps there are even vorticial elementals; Fay who by their nature venture out and draw the elements of their sphere with them. 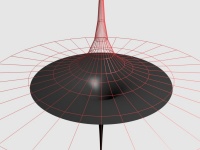 So, that picture of twinworld is weird. Is it spherical, and that picture is a sort of splayed out dissection, or is it actually hyperbolic? If it's hyperbolic, I'm going to have to work on a mental framework to visualize it.

If it's spherical, it makes sense enough. The Outer Fire concept is a great way to have a "planar" sort of cosmology that uses magical interplanar transportation rather than spaceflight. I'm not sure how rocks can be continually exuded by the adamant in a spherical model, though, unless the planet essentially grows continually. If it's hyperbolic, the lithic flow would eventually meet the outer fire (at infinity), and they would (presumably) annihilate. I assume that someplace in the "up" direction is the source of the outer fire.

If hyperbolic in the x-y plane, what does the z plane look like? Is it extruded, or rotated? Some references (like on the Heart of Water seem to imply that it is rotated.

The picture of twin world is an approximate cutaway, along the x-z axis (vertical is up and down) Here's a 3d view of the boundaries (though not the contents). I think you were right-on with your Hyperbolic understanding. Ziggy 23:45, 12 February 2009 (UTC)

I've found some reference to elemental beings who (naturally) move through their preferred medium as freely as we move through air. Are there "natural" creatures that firewalk, or earthglide, as well?

In my link-following, I haven't found a central explanation of the elemental system. The relationship between Adamant and Outer (Pure?) Fire is straightforward enough. I've found reference to Water. What is/are the other element(s)? If my overhearing is right, are they Air and Solid Clouds (bouyant pseudosolids?)?
--Toad 23:10, 12 February 2009 (UTC)