The wonderbuss is a magical blunderbuss kept on the mantel in house prime. It is like Gaston's blunderbuss from Beauty and the beast, in that it can fire multiple times without reloading. It also can be pulled down for as many people as required. 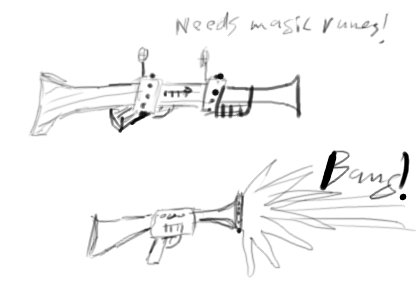 This is a nasty sketch. The actual wonderbuss will look awesome.

Like Gaston's blunderbuss, the wonderbuss can fire concentrated slugs of dark material. It also functions like a normal blunderbuss or shotgun. Perhaps there should be a few levers on the side, for different settings.

The wonderbuss needs to de-spawn, break, run out of ammo, or change into something else at some point, so that it isn't a broken idea.

It could become useless after:

I suggest that for each instance after a random number of shots (that you can't know beforehand, perhaps with a random chance every shot) that instance turns into a stick. Also, you can take down as many as you like, but each time the "power" of each wonderbuss is divided by that amount, so if you have lots of instances, they are all pretty pathetic. Also, what if every instance shoots at once whenever anyone pulls any of the triggers? Ziggy