The Woe is Mogan's ship. 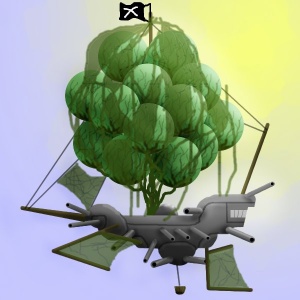 The Woe is an airship supported by Sky Vines (alternately, anti-grav alloys?) and propelled by enslaved Slyphs. It is the hybrid of Zarthian ingenuity combined with Fay magic. Mogan and his band of cut throat Zarthian's pillage the skies and surface for loot and fresh Fay slaves.

The Woe is separated into two main parts. The Mechanical Abomination and the Lift and Displacement Module (aka the ballons). The Mechanical Abomination externally houses all forms of weapon systems designed for specific tasks. These tasks range from killing stuff, burning stuff, breaking stuff, and stealing stuff. Internally, it has the crew, including Mogan, the slaves, and Mogan's mount: the dragon.... who really needs a name and a character page. The Mechanical Abomination is extremely wide for its thickness giving it a unstable sway in the breeze. The Lift and Displacement Module is a vast array sails. These are placed all around the sides and top of the Mechanical. The sails themselves are made of a special breed of sky vine meshed into a hex pattern to create sheets. These sheets are blown with wind summoned by the Fay held captive inside. In the center of the Sails, directly above the base is a large cluster of skyvines... much like a bunch of baloons. Most everything about how the mechanical and sail parts are designed is for the purpose of obscuring the "main lift cluster". This is done 90% for visuals.

The cannons on the Woe are magic cannons!