A Mecha is a general term for any mechanical, energized, configurable device.

With the proper compoents, a Zarth can quickly assemble a variety of tools, vehicles, and armor, as well as weapons like the sword, pick, halberd, staff, gun, and grenade. Nearly all Mecha accept one or more batterys to power their movement.

The Zarth generally build their devices with a system of internally consistent connectors. The standardization rarely extends outside of an individual set of Mecha components. This means that each Zarth usually has a whole suite of Mecha components which work together, but rarely interface with other Zarth components. Mechanomancers can usually refit components to work with a different Zarth's equipment.

The Zarth have a natural ability to shape metal and stone. Nevertheless, tools can come in handy from time to time. A Mechatool is composed of a handle attached to an interchangeable "working head". These components can be exchanged to create tools including the:

A variety of handles, some telescoping (for leverage), some padded, shielded, or insulated (for working with energetic, hot, or dangerous materials), and some designed for striking (for chisels and the like) can be used with the different tool heads.

Worn over the body, the mecha armor is basically an exoskeleton. Nearly all mecha armor include batterys in all the joints, and responds to the wearer's motions. Since the force is amplified, deadly oscillations can develop, making Mecha Armor dangerous for unskilled wearers. A variety of weapons can be mounted directly to the exterior of the armor, allowing the wearer to be completely enclosed during battle.

Mecha armor is also used in non-combat situations for moving equipment and operating in hostile environments. The insane craft of the mechanomancers results in armor that can be hermetically sealed, allowing Zarth to operate under water, and even for brief periods in the flames of the Outer Fire.

A mecha weapon is very similar to a mecha tool. It is composed of a variety of handles and attachments. A common form is the MechaBlade, composed of:

This combination of components can be re-arranged during combat into a: 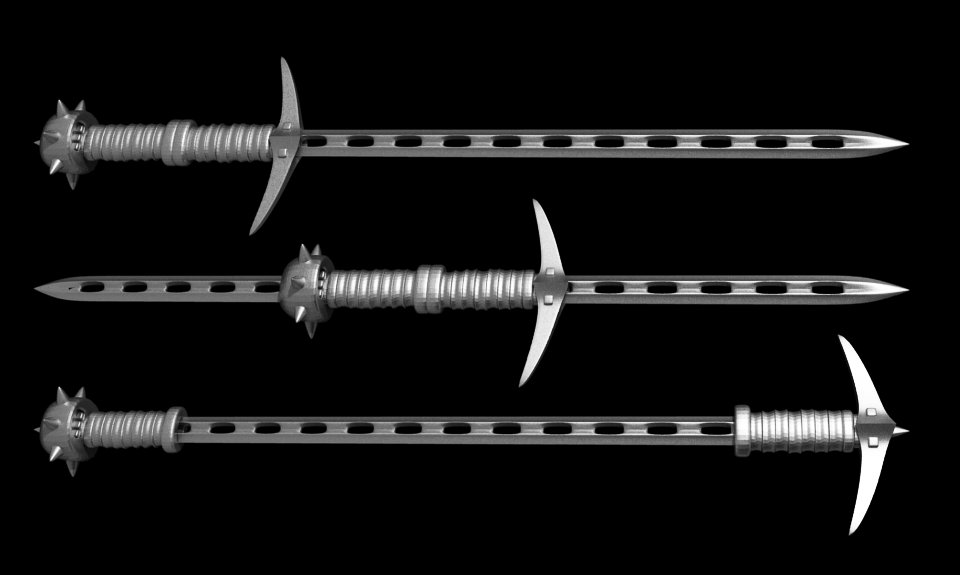 There are many handle and blade variants. The most common are:

Many Zarth have hard protrusions on their bodies, allowing them to mount Mecha armor, tools, and weapons directly to their skeleton without the use of handles. The personally interchangeable nature of zarth technology stems directly from this physiological feature. Zarth lacking such natural hard-points are referred to as "handy", a purely derogatory term referring to their need to use their hands to manipulate all forms of Mecha. Regardless, many "handy" Zarth have strap-on hardpoints which serve the same purpose as their natural analogs.