Difference between revisions of "The Fayrie"

The Fayrie live in Faierie (primarily the upper portion), a land of enchantment, illusion, and general all-around magic. They are themselves fundamentally creatures of magic, and can be in turns mischievous, helpful, and obscure. They are feminine, and the gender mirror of The Zarth (See: Fay-Zarth Relations for how they interact).

The fayrie are very effeminate, from giddy and girly to austere and graceful. However these words rarely apply "badass" "violent" "reckless" "Loud" etc.

I'm thinking of giving the Fay a Norse flavor. This fits with the Great Tree as Yggdrasil. It also fits with our own ancestry, which is Norwegian through our mother's mother.

The Fay, Changelings, and adventure

Luke and I (Paul) talked about this idea. The principle is that the Fay are rather like regional spirits. They have their place in Faierie, and they have no desire to venture out of it. However, they do appreciate the fruits of other regions, so they employ humans (changelings) to fetch things for them, and do errands. The Fay could also have unique perspectives on what the "surface" and "sky" of Faierie is. The trolls of the depths might consider the surface to be the Adamant at the center of their world. Anything above it is just too insubstantial to support life. Their sky is miles of rock, soil, and tunnels. The sylph, on the other hand, inhabit the upper reaches of the sky. The solid-clouds are their ground, the surface of their world. Their sky is the stars, and the outer fire. The Sylvan Fay would consider the woods to be the surface, below there is no light, and above there is too little vegetation. Their sky would consist of the sky-vines and the clouds. For each Fay, a different place is "home" and they have no need for exploration or adventure. This is what makes the HOZZ brothers so unusual. They have the abilities of the Fay, but are not content with their home, and seek to wander, explore, and learn about the different places in Faierie.

The males are rare, dispassionate, and itinerate. They have relatively little magic power. Because of their steadier minds they are valued as advisers. Often they will be used as diplomats to the Zarth. The males chief role is to fertilize the flowers from which new fay are born.--Hugh 00:57, 21 February 2009 (UTC)

I think that Fay should have two genders. To reproduce the females plant a flower and the male fertilizes it. Upon maturity the flower blooms to reveal an infant fay. The flowers take a long time to mature which limits the rate of reproduction. One male may fertilize many flowers. --Hugh 00:57, 21 February 2009 (UTC) 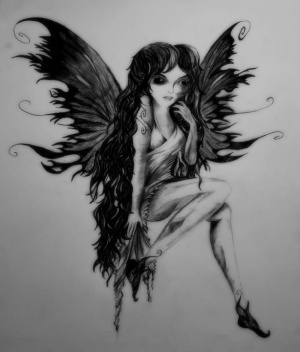 The Fayre are roughly arraigned in strata from the surface of the Twin World to the Outer Fire. Generally speaking, although not universally, The different species of Fay are larger and live longer near the surface and are smaller and live shorter near the fringe. Thus you may have sylvan Elves that walk on the ground, Pixies and Fairies of diminutive nature traipsing between the skylines, and civilizations of tiny wisps near the sky's end(think Horton hears a Whoo).

I'm not quite sure where to put this. But we realize that if the Zarth have a dispute they resolved it with physical force or mental superiority. On a large scale this is War, on a small scale its duels and contests. The question remains how Fay resolve conflict. I suspect that on a small scale they use social means like meetings, diplomacy, manipulation, votes, and the like. But how and what are large scale Fay disputes? Do they even have any? If not why are there Livewood masters? What if Livewood combat was much like Tia-Chi, where its as much of an art and a dance as is a form of martial prowess. And if so, why would anyone practice that? Oswald